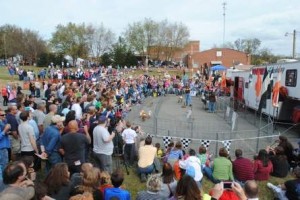 Well, my hand went up to the emcee’s question… at Boone Hall Plantation’s Strawberry Festival. Little did I know when my feet hit the floor this morning that I would not only witness a pig race but could possibly be awarded the title, Pig Queen for a Day! Unknowingly, I’d claimed my video spot near the starting line of the circular race track and had an excellent view. There was a gator board roster with piggish NASCAR names— Rooter Martin, Hoggy Stewart, Piggy Gordon and Squilling Earnhardt, Jr.

Naturally, being new to pig racing, I had questions for the little swine. How were they trained for the event? I’d hate if one of the cute piglets would pull a hamstring. What if it came down to crossing the finish line by a snout? God forbid serious injury because I wasn’t sure if Charleston had a pig racing hambulance.

Suddenly, my attention returned to the hoof track as Hogway Speedway’s announcer entered the inside field, wearing a hands-free mic opening the competition with the racetrack bugle call from the loudspeakers.

The announcer educated us on the possibility of pig pile-ups that could delay them from pigging out on the coveted cheese doodle at the checkered finish line. He assigned a sponsor from the audience to root for the anxious pigs that had willingly loaded in the starting gate.

After the bell and gate opened, he gave a broadcaster’s view of the pig pack’s arrival for cheese doodle trophies. For the next fifteen minutes, he presented laps by goats, rookie piglets and ducks. The final race was to be run by pot belly pigs and he announced he was picking five women to be given the proud title of Pig Queen. I don’t think I’d put that on my slop-bucket list.

As he looked our way, my niece encouraged him to pick her Aunt Kat. Note to self: I need to dig deeper into her belief that I’d make a good candidate—or I needed to be sure I didn’t have hog breath from the cheap corndog. Yep, I was given #5, Rooter Martin. To top the hammy privileged title, we were advised the winner would kiss her pig. (For some reason I heard the words to a Katy Perry song: I kissed a pig and I liked it…)

After three more contestants were chosen, Squilling Earnhardt, Jr. hogged the spotlight. I’d lost my chance of the title and kiss by a snout.

Sadly, I realized I wanted to be a media hog! I turned to my husband and we settled for a local pulled pork sandwich. 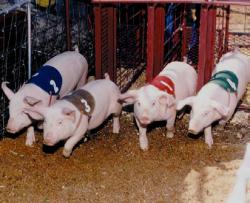