For the past few weeks, there seems to be an employment surge on the corners of major intersections in my city. By no means do I think it is a new concept. But, this group seems to be as organized as the CEO of a van of kids dropped off to canvas neighborhoods selling magazine subscriptions. I don’t see any signs of homeless veterans, but mostly young adults drinking Dunkin’ Doughnuts coffee and changing shifts with another peer sitting under an overpass. 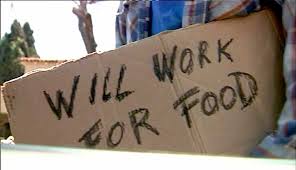 I guess my beef is that I see “Now Hiring” signs in business windows up and down my suburb’s highways. I was not a privileged young adult that was able to go to college. However, the work ethic that my parents raised me with failed to allow myself to indulge in the idea that I would ever get rich quick. I worked fast food, the Piggly Wiggly deli and eventually into law offices to earn the title of Legal Assistant for a prominent attorney.

Yes, I worked for food. I improved my living conditions at a tortoise pace. Nothing happened overnight or was served from a silver spoon. My children didn’t have every gimmick or name brand fashion.

I can’t imagine that choosing to hold a sign at the side of a highway pays more than minimum wage at a department store or restaurant. I am not judging their choice to participate in a group peddling scam, but I guess it plucks a sour note. As the younger son in the Bible’s Prodical Son story, I tend to resent being the dutiful worker bee. The one that sends a check to the government and doesn’t sit and wait for one. As hard as it is to stop from rolling down my window and share the fruits of my labor, I feel I am enabling slothful mentality. As my friend, Jacqueline Gum, says…. Where’s the Justice?

5 thoughts on “What are you peddling?”